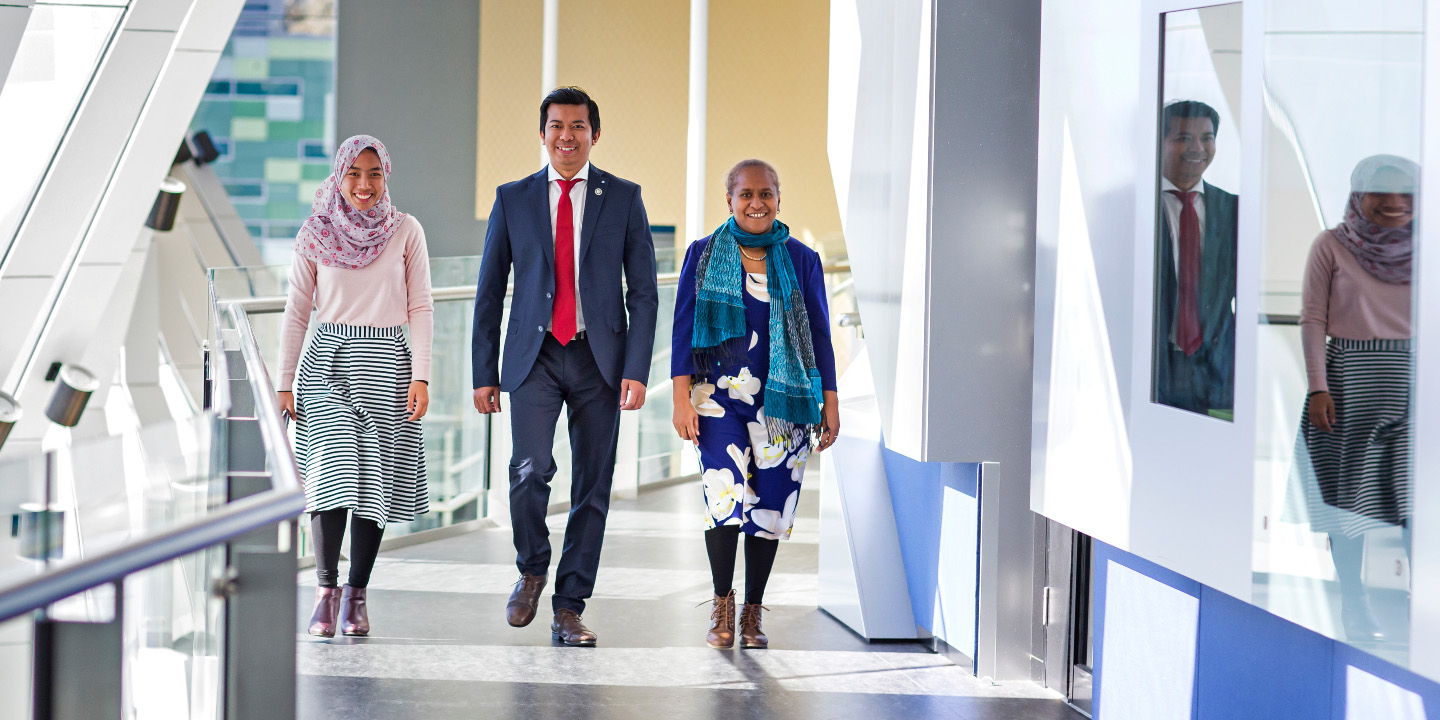 New research from the Australia Awards Global Tracer Facility shows the alumni of Australian Government development scholarships and fellowships have contributed to all 17 areas targeted by the United Nations Sustainable Development Goals (SDGs).

The Facility’s latest report is a synthesis of the research undertaken in the first four years of the program. It explores the themes and findings around the long-term outcomes of the Australia Awards and predecessor scholarships and fellowships over a 70 year period – from the 1950s to the 2010s.

The report analyses survey responses from 6300 alumni from 122 countries who studied in Australia between the mid-1990s and mid-2010s. It also includes case study data collected through in-depth interviews with 148 alumni and 206 stakeholders in 18 different country contexts. 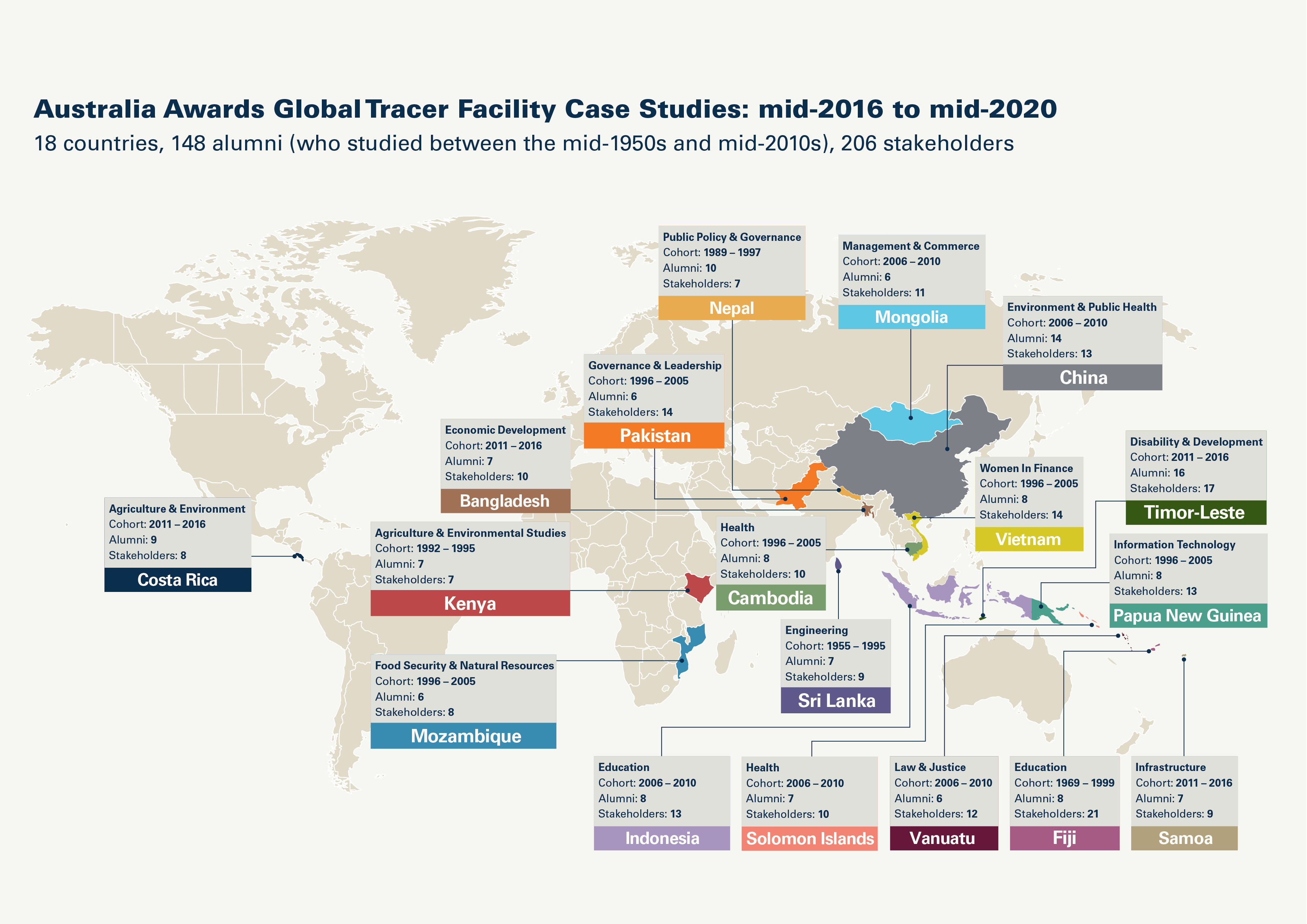 A critical aim of the Australia Awards and predecessor scholarships has been to build skills and capacity in alumni so that when they return home, they are able to demonstrably contribute to the development of their country. The Facility was able to map the collective contributions of alumni to all of the 17 UN SDGs.

In equipping alumni with knowledge and skills, the Australia Awards intends that alumni not only use them to contribute to sustainable development on their return to their home country, but also pass them on to their colleagues. Survey responses show that the vast majority of alumni have introduced improved practices and innovations through their work (96 per cent) and passed new skills and knowledge on to others (98 per cent) as a result of their award.

Older alumni, and those who had completed their award more than a decade ago, were more likely to have achieved these goals. For example, 53 per cent of alumni who graduated within the past five years strongly agree that their award has helped them introduce improvements in their workplace, compared to 61 per cent of alumni who completed their study more than 15 years ago.

This may simply indicate that alumni who have had more time in the workforce may also have had more opportunities to implement improvements and innovation. However, it also suggests that the experience alumni have during their award has a long-lasting effect on their career and their ability to make positive improvements through their work.

Disability inclusion is targeted in five of the UN Sustainable Development Goals, and is an overarching priority of Australia’s foreign aid investments. Since becoming, in 2009, the first donor country to make development assistance disability-inclusive, the Australian Government has introduced a number of initiatives to improve access to and participation in the Australia Awards for people with disability.

Encouragingly, survey responses from 141 alumni who have identified as having disability show that these alumni have similar response patterns to all other alumni in relation to the long-term outcomes of the Australia Awards.

As a result of their scholarship, it is intended that alumni build effective, mutually advantageous partnerships between institutions and businesses in Australia and partner countries. Among all the long-term outcomes for the Australia Awards, this aspect appears to have been the most difficult for alumni to achieve.

Just under half of all alumni surveyed have been able to establish a professional link with Australia following their award, while the vast majority of alumni who do not have professional links with Australia would like to in the future. The research suggests the development of professional links is dependent on a number of factors that are not necessarily all within the control of individual alumni, including the type of course and opportunities available to them while on award, and the sector and type of position the alumni assumes when back in their home country.

Alumni from regions closest to Australia tend to be more likely to have made a professional link with Australia, with 57 per cent of alumni from PNG and by 47 per cent of alumni from Pacific Island countries having established links, compared to 38 per cent in Sub-Saharan Africa and 36 per cent in the Caribbean. This is likely an outcome of practical realities of geographic distance, as well as Australia’s particularly notable aid focus in the Pacific and PNG.

Alumni who now work in the university sector and NGOs indicate a greater likelihood of having established professional links with Australia. Nearly half of all partnerships established by alumni are with Australian universities. A further quarter are with departments in the Australian or state public service, and the remaining quarter are among private sector organisations, NGOs and other groups.

The Facility’s report includes additional analyses relating to topics of interest that add insight into the experiences and contribution of alumni. For example, analysis of data from the 2018 International Graduate Outcomes Survey revealed development scholarship alumni were far more likely than private, self-funded international graduates of Australian universities to have positive outcomes from their degree, and intend to stay connected with Australia and fellow alumni.

The report concludes by exploring the conditions for success identified throughout the report, and framing these conditions in relation to potential policy and practice suggestions for key Australia Awards delivery partners. ■

Find out more:
The Australia Awards Global Tracer Facility is managed by the Australian Council for Educational Research (ACER) on behalf of the Australian Department of Foreign Affairs and Trade (DFAT) .