Sue Thomson reports on the findings of an international assessment of problem-solving skills that shows Australian teens persist at thinking it through.

The national report, Thinking it through: Australian students’ skills in creative problem solving, released by the Australian Council for Educational Research in September, presents the findings from the 2012 OECD Programme for International Student Assessment (PISA) problem-solving assessment.

Managed by ACER at the national and international level for the Organisation for Economic Cooperation and Development (OECD), the PISA 2012 problem-solving assessment measured 15-year-olds’ general reasoning skills, and their willingness and ability to regulate problem-solving processes.

Around 85 000 students in 28 OECD countries, and 16 partner countries and economies participated in the computer-based assessment. The Australian PISA 2012 sample consisted of more than 14 000 students from 775 schools, drawn from all jurisdictions and school sectors.

Australian students achieved an average score of 523 points, above the OECD average of 500 points but significantly behind the highest-achieving countries, Singapore and Korea, which averaged 562 and 561 points respectively.

Australia was one of 19 countries that achieved a mean score that was significantly higher than the OECD average.

Around 84 per cent of students in Australia, England, France and Italy achieved or exceeded the baseline proficiency level (Level 2), where students begin to demonstrate the competencies that will enable them to participate effectively in life situations, compared to around 93 per cent in Korea, Singapore and Japan, and 80 per cent on average across the OECD. 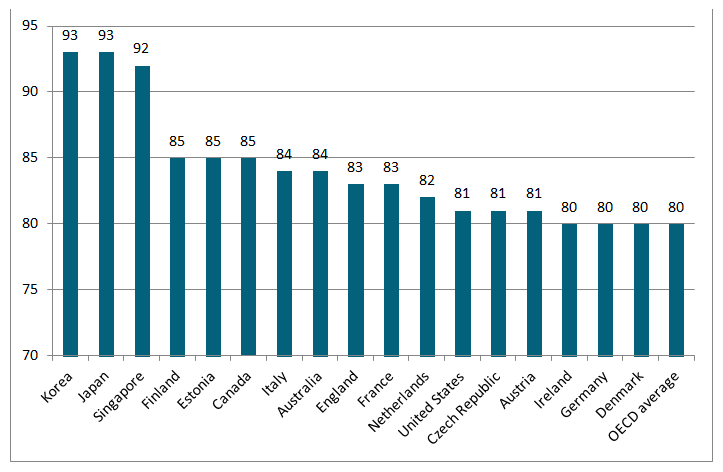 The average score for Australian boys was not significantly different to that for Australian girls. Western Australia was the only state or territory to have a significant gender difference, with boys scoring 18 points on average higher than girls – a difference three times larger than the OECD average.

PISA examined whether the variation in problem-solving performance within countries is attributed to within-school (student-level) or between-school (school-level) differences.

In Australia, the amount of variation in performance within schools was 75 per cent, and was higher than the OECD average of 61 per cent, indicating that student-level factors have greater impact on problem-solving achievement in Australia than across OECD countries. Within-school differences ranged from 72 per cent in Victoria to 94 per cent in the Northern Territory.

The amount of variation in performance between schools in Australia was 28 per cent, compared to the OECD average of 38 per cent. Between-school differences ranged from 19 per cent in South Australia to 39 per cent in Tasmania, suggesting that school choice in Tasmania will influence student problem-solving performance more than school choice in other states and territories. Internationally, the lowest variation in between-school performance was found in Finland (10 per cent), where students can expect to achieve similar results regardless of the school they attend.

Based on Australia’s overall performance, Australian students are comparatively stronger on the exploring and understanding, and representing and formulating processes, and are relatively weaker on the planning and executing process.

In terms of problem-solving skills, Australian students are good at generating new knowledge and can be characterised as quick learners – questioning their knowledge and challenging assumptions, and generating and experimenting with alternatives – and good at processing abstract information. Australian students’ skills in using their knowledge to devise and execute a plan in order to solve a problem could, however, be improved.

Perseverance relates to students’ willingness to work on tasks that are difficult, even when they encounter setbacks.

Students need to be willing to engage with problems and to be open to new challenges in order to be able to solve complex problems and situations.

In Australia, two-thirds of students indicated they sought explanations for things, approximately half indicated they could handle a lot of information, were quick to understand things and could easily link facts together, and one-third reported they liked solving complex problems.

Read the full report:
Thinking it through: Australian students’ skills in creative problem solving, by Lisa De Bortoli and Greg Macaskill, is available from the Australian PISA website < www.acer.edu.au/ozpisa >