A report released today by the Australian Council for Educational Research (ACER), the managers of the Program for International Student Assessment (PISA) in Australia, explores Australian students’ sense of belonging.

Why does this matter?

For some students, a sense of belonging is indicative of educational success and long-term health and wellbeing. It has also been found to promote positive attitudes towards students’ learning.

What’s more, students who feel part of, and accepted by, their school community are not only more likely to participate in school activities, both academic and non-academic, but will be actively engaged in these activities.

What were students asked?

PISA 2015 asked students to rate their reaction to these six statements on how they feel about school:

Student responses (strongly agree, agree, disagree and strongly disagree) were combined to construct the sense of belonging index. This allowed us to compare Australian students with their OECD counterparts and with their peers in different states and territories, socioeconomic groups, and between genders. 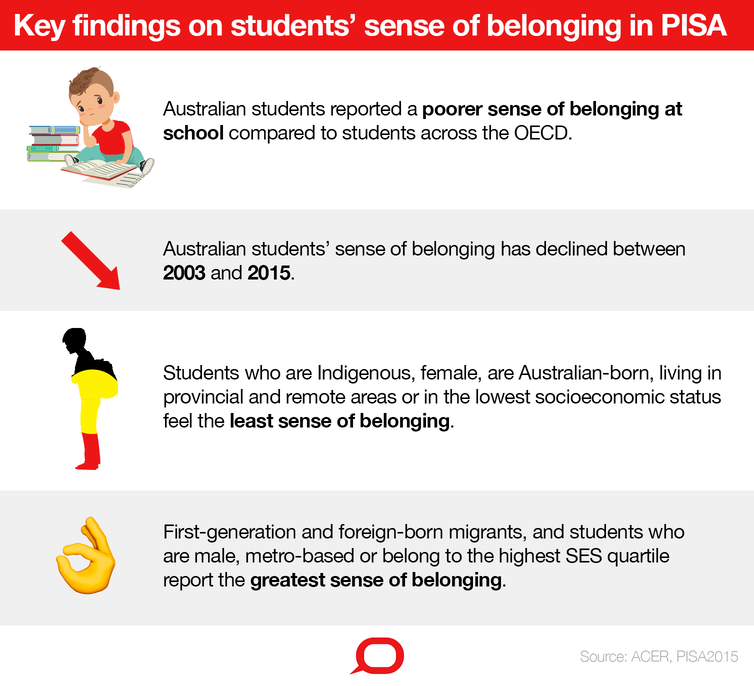 How does Australia compare?

Students in the high-performing countries did not necessarily report a greater sense of belonging than Australian students. Macao (China), Hong Kong (China), Singapore, Canada, Estonia and Japan came in below, and Finland above, the OECD average. Students in the other English-speaking countries also reported a sense of belonging below the OECD average.

Figure 1: Students’ sense of belonging at school, for Australia and the OECD average.

We also examined sense of belonging among a number of different groups within Australia.

There were stark differences in the results for different levels of socioeconomic background. In PISA, the socioeconomic index for students is broken into quarters and compared.

Even when taken individually, some of these differences are disturbing. While the majority of Australian students feel a sense of belonging at school, there is a solid core of students who do not feel this way – roughly one in five, or five students in the average classroom.

But we know the issues in individual schools can be much worse than these figures describe. Other than gender, these characteristics are not randomly distributed across the population.

For example, there are schools that enrol a large proportion of low socioeconomic background students. The number of students who feel like an outsider, lonely, or awkward will be much higher in these schools than in schools in which there are few such students.

For provincial and remote schools, the proportions could be further inflated, with more students from Indigenous backgrounds and more students at lower levels on the socioeconomic index.

Sense of belonging at school in Australia has declined overall between PISA 2003 and PISA 2015. It has declined across all demographic groups.

This article originally appeared on The Conversation.

A new way to assess social and emotional skills