Audiences across Australia are responding positively to the first animated children’s series to feature Indigenous Australians and their culture.

Little J & Big Cuz, the animated television series aimed at improving the transition from home to school for Aboriginal and Torres Strait Islander children, has been embraced by cultural groups across Australia.

The series was developed specifically for children aged four to six years, both in the home and in educational environments. A suite of free Little J & Big Cuz educator resources mapped to the Early Years Learning Framework and the Australian Curriculum has also been developed to support early childhood educators and primary school teachers in including Aboriginal and Torres Strait Islander perspectives and pedagogies in their classrooms.

Following its broadcast premiere on NITV in April, Little J & Big Cuz was aired on ABC ME during NAIDOC Week, while NITV screened episodes re-voiced in Aboriginal languages with English subtitles.

Now Little J & Big Cuz will be on show for National Aboriginal and Torres Strait Islander Children’s Day, through inclusion in the Children’s Day activity bags and with a hands-on exhibit at the subsequent Little Kids’ Day In: First Peoples at Melbourne’s Scienceworks.

‘We know that a focus on change in the early years is fundamental to Closing the Gap,’ Ms Atkinson said, speaking ahead of Children’s Day.

‘Little J & Big Cuz not only emphasises this critical time and shines a positive light on our kids but, with its free educator resources, Little J & Big Cuz can act as a spring board for engaging with and embedding Aboriginal and Torres Strait Islander knowledge, understanding and skills in educational environments.’

ACT primary school teacher Elissa Sharpe has been showing episodes of Little J & Big Cuz to her class while they have their morning fruit break. 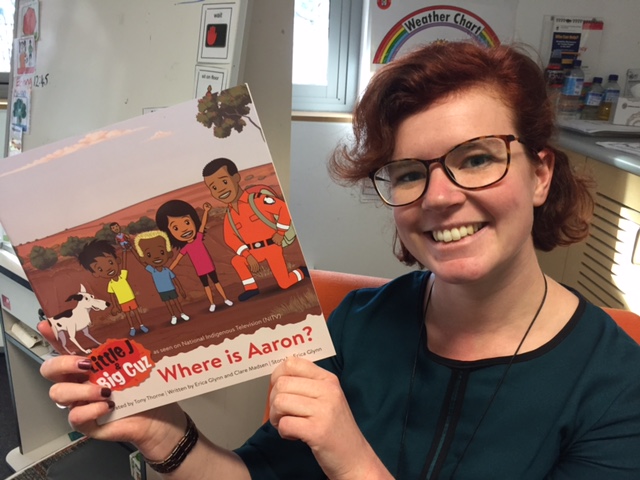 Ms Sharpe teaches a Year 1/2 composite class at Namadgi School in Kambah. Her students come from diverse backgrounds, including first-generation refugee children and Aboriginal and Torres Strait Islander children, and speak a variety of languages at home.

‘My students love watching Little J & Big Cuz,’ said Ms Sharpe. ‘They all immediately identified with the characters. The younger ones like Little J and the older ones think Big Cuz is “really mature and cool”.’

Ms Sharpe has used some of the friendship and self-esteem problems from the show to help her students to explore their own emotions and how to resolve social conflict. They have also learned about animals, bush tucker, respect and what it means to be Aboriginal in 2017.

‘It's been a really lovely and genuine way for the ATSI children and non-ATSI children to perceive Aboriginal and Torres Strait Islander perspectives and cultures in a way they understand and that is meaningful to them,’ Ms Sharpe said.

‘This show made my most isolated student feel a part of something. He has never been able to focus for more than 45-70 seconds, until he saw Little J.’

Little J & Big Cuz is currently available to view online on ABC iView until 7 August 2017 and on NITV via SBS On Demand until May 2022. For access to the free educator resources, visit the Little J & Big Cuz website.