New analysis shows that both students’ choice of senior school mathematics subjects and their subsequent performance are related to achievement in university science and maths classes.

The Australian Council of Deans of Science commissioned ACER to explore how senior secondary school mathematics subject choice and results are related to biology, chemistry, mathematics and physics pass rates in the first year of university.

The study is the first attempt to examine this issue across a range of Australian universities and science disciplines.

The study analysed 16 436 school completers in their first year of a bachelor degree in science, who undertook first-year biology, chemistry, mathematics or physics subjects. Twelve Australian universities from a mix of university groups, states and metropolitan/non-metropolitan areas provided detailed data for the analysis, which focused on the first semester of 2015, 2016 or 2017.

Across the four disciplines examined, first-year students at Group of Eight (Go8) universities were more likely than students at other universities to have studied higher-level mathematics (Mathematical Methods or Specialist Mathematics) when in senior secondary school (Figure 1). 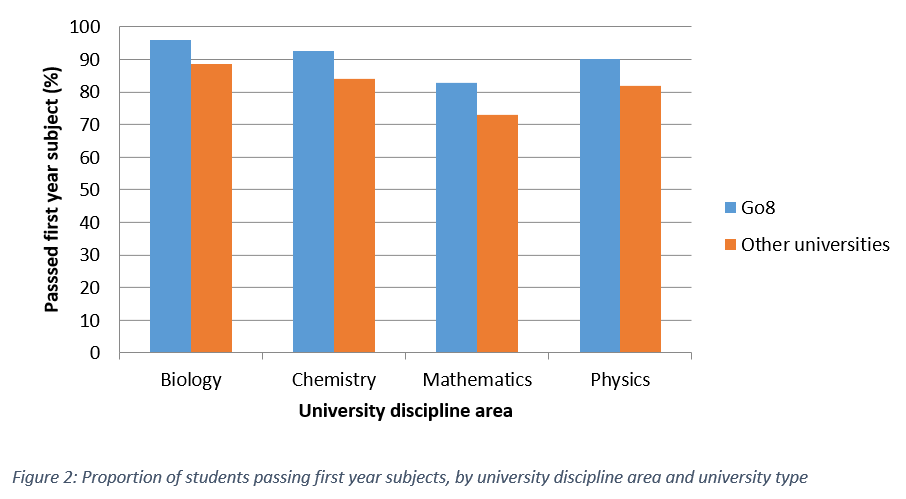 Interestingly, students who were in the top two achievement bands for General Mathematics achieved similar or higher first-year pass rates than students with low/very low performance in Mathematical Methods or Specialist Mathematics.

Additional analysis explored whether mathematics background is related to first-year subject outcomes after taking into account ATAR, senior secondary background in a corresponding science discipline and other student characteristics. After controlling for these factors, students’ mathematical background remained related to first-year subject outcomes in each of the four disciplines examined in Go8 universities, and for first-year biology, chemistry and mathematics (but not physics) outcomes at non-Go8 universities.

Having studied a science subject in a corresponding discipline in senior secondary school is also related to success in first-year biology and chemistry, but not first-year physics (Figure 4). 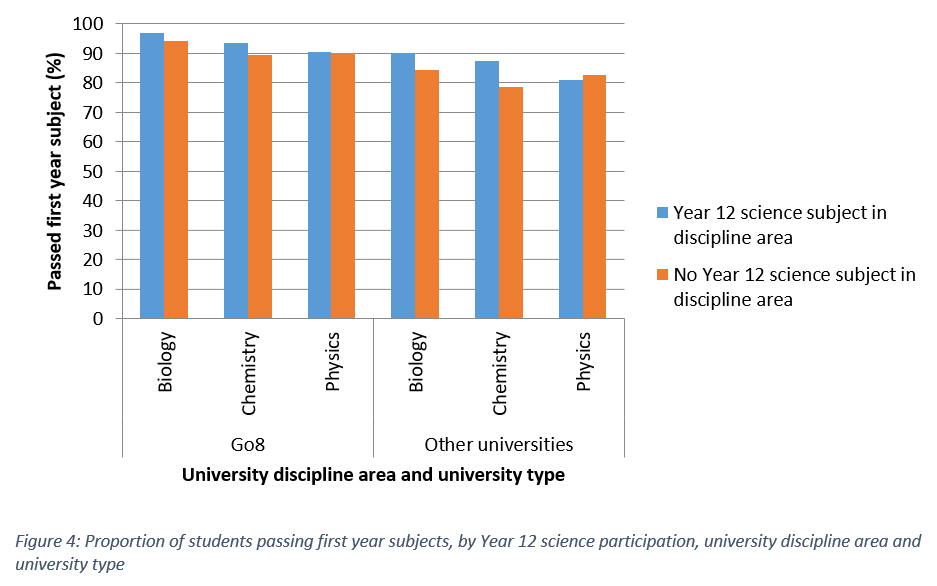 The first-year pass rates of the ‘low mathematics’ group in Go8 universities ranged from 94 per cent in biology subjects to 74 per cent in physics, which was similar or slightly lower than the pass rates for those whose highest level of senior secondary mathematics was General Mathematics (Figure 5). 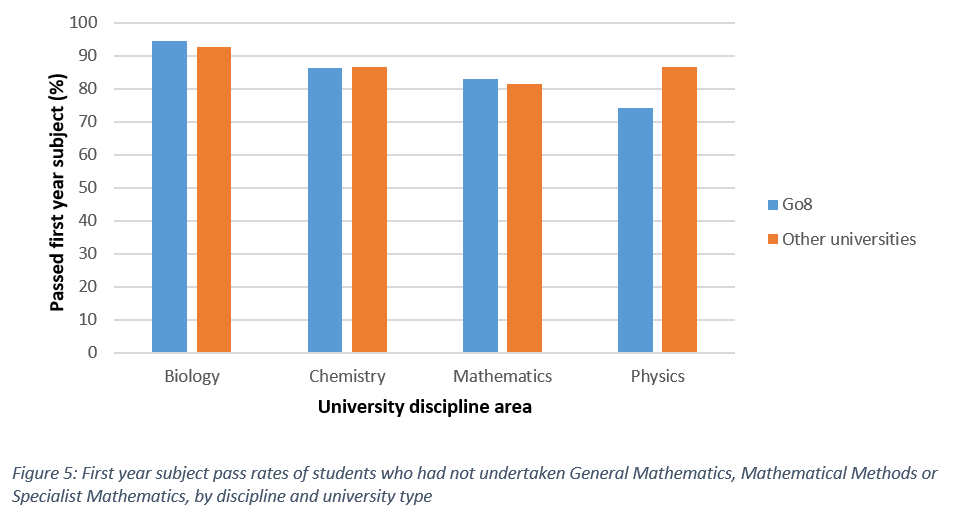 In non-Go8 universities, the pass rates of this group ranged from 93 per cent in biology to 81 per cent in mathematics. The non-Go8 ‘low mathematics’ group therefore had higher pass rates than non-Go8 students who had undertaken General Mathematics, Mathematical Methods or Specialist Mathematics in senior secondary school.

There has been much debate about prerequisites for university mathematics and science courses, and whether mathematics should be compulsory in senior secondary school. Overall, our findings show that, while the majority of university students do pass their first-year biology, chemistry, mathematics and physics subjects, some groups perform better than others. This has implications for school subject choice, university admissions policies, and the support services provided to first-year students.

Literacy and numeracy for the 21st century