If education is to be meaningful, relevant and high impact for Indigenous Australians, we need to take an expansive and learner-centred approach, says Tony Dreise.

A report card on the nation’s performance in providing education to Indigenous Australians  shows mixed results. Data show both encouraging results and an ongoing need for major improvement. For example, Indigenous participation in VET increased by 48 per cent between 2002 and 2011, according to the National VET Equity Advisory Council National Report on Social Equity in VET 2013, while Indigenous Australians made up three per cent of all apprentices and trainees in 2011, slightly higher than the Indigenous share of the general population at 2.5 per cent. Meanwhile, Australian Bureau of Statistics data reveal that the gap between Indigenous and non-Indigenous student retention to Year 12 has reduced from 37 percentage points to 28 percentage points over the past decade. At the university level, according to a background paper for the Commonwealth government by Ekaterina Pechenkina and Ian Anderson, about 10 000 Indigenous people were enrolled across Australian universities in 2009, significantly lower than the 2.5 per cent share of the general population.

One way to support improvement in secondary schooling choices for many Indigenous young people is through a model called ‘Learning, Earning, Yearning’, illustrated in Figure 1. Inspired by a program from the United States that simultaneously embraces ‘mainstream subjects’ with Indigenous goals, the model is built on an expansive approach to education. It responds to the quest by Indigenous young people for safety, connection to culture and place, jobs, inclusion and support measures aimed at reducing the stresses of schooling and life outside school. 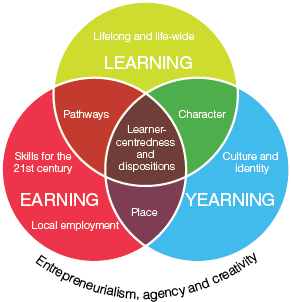 At the heart of the model is the notion of ‘learner-centredness’. ‘Place’ is another key driver, given that approximately 85 per cent of Indigenous young people attend a local public school and in light of Indigenous cultural preferences for staying on country. Developing entrepreneurial mindsets, supporting personal agency and fostering creativity underpins the model so that learners are not simply consumers of learning, but producers of it. Further, the model simultaneously embraces the idea that young people should grow not only their identity but their character. Lifelong and lifewide learning is at the top of the model to symbolise the need for learning dispositions.

School education is not engaging about one in two Indigenous young people through to successful completion of Year 12. This non-completion barrier impacts on their ability to go on to learn at university and earn reasonable incomes through employment. Boyd Hunter highlights the importance of first overcoming the barriers to education and training by taking a learner-centred approach, beginning with the crucial recognition of the ‘diverse and distinct cultural and social life experiences of Indigenous school leavers.’

The key to learner-centred education is to customise the curriculum to provide learning experiences that are meaningful, relevant and high impact for students from disadvantaged areas, but as Charles Leadbeater and Annika Wong make clear, if such an approach to ‘disruptive innovation’ is to succeed it needs to blend formal and informal learning.

Charles Fadel, noting that ‘knowledge’ needs to be connected to the real world to ensure that learners are engaged and motivated, argues for a greater balance between conceptual and practical learning and consideration for knowledge that sparks student entrepreneurialism and ethical behaviour. With regard to ‘skills’, he highlights the ‘4 Cs’: creativity, critical thinking, communication and collaboration.

If Australia wants to see more Indigenous young people complete Year 12 and go onto university or participate fully in civic life, we need to take complementary action both outside the school gates (in overcoming the significant obstacles they face, such as poverty) and inside the school gates (including through the provision of learning experiences that truly engage). A customised yet intellectually rigorous curriculum that enables a learner-centred approach provides a way forward.

Such an approach may improve the nation’s report card, and we ought all to be pleased about that, but the intrinsic benefit is that all Indigenous Australians are learning, earning and yearning.

Further information:
This article is based on the conference paper, ‘Learning, earning and yearning: Disruption, innovation and expansion in Indigenous education,’ delivered by Tony Dreise at ACER’s Research Conference 2014 on the theme ‘Quality and Equity: What does research tell us?’ on 5 August.