Results from the latest international assessment reveal that, despite still performing above the international average, the mathematics and reading skills of Australian 15-year-olds have slipped backwards over the past decade.

The Australian Council for Educational Research (ACER) released the national report of the 2012 Programme for International Student Assessment (PISA), titled PISA 2012: How Australia measures up, in December 2013.

Managed by ACER at the national and international level for the Organisation for Economic Cooperation and Development (OECD), PISA measures how well 15-year-olds from across the globe are prepared to use their knowledge and skills in mathematics, reading and science to meet real-life challenges.

A combined total of more than half a million students from 65 countries and economies took part in PISA 2012, including a nationally representative sample of around 14 500 Australian students from 775 schools.

Table 1: Performance of countries/economies in PISA 2012 in relation to Australia

Australia has now participated in all five cycles of PISA since its inception in 2000, allowing trends over time to be mapped.

PISA 2012: How Australia measures up revealed that, while Australian 15-year-old students are still performing above the OECD average, their mathematical and reading literacy achievement declined over the past decade, while their achievement in scientific literacy has remained relatively stable. 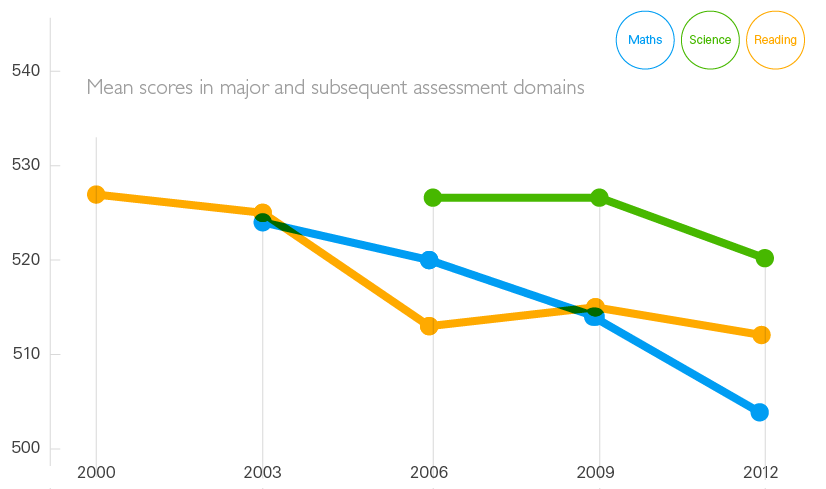 Australia’s mean mathematical literacy performance declined significantly between PISA 2003 and PISA 2012, such that it was the equivalent of students in 2012 being about half a year behind similar students in 2003. Twelve other countries, all OECD members, have also seen a significant decline in their mathematical literacy performance between PISA 2003 and PISA 2012. The largest decline occurred in Sweden, followed by Finland, New Zealand, Iceland then Australia.

Poland has steadily improved since 2000 and is now ahead of Australia in maths, while Ireland has successfully reversed its own downward trend and now outperforms Australia in reading literacy. Since 2009, Poland has managed to improve its mathematical literacy performance by the equivalent of an additional three-quarters of a year of schooling, while Ireland’s improvement in reading literacy represents around four-fifths of a year of additional schooling.

Note: PISA Level 3 is identified in Australia’s Measurement Framework for Schooling as the nationally agreed baseline, as it ‘represents a “challenging but reasonable” expectation of student achievement at a year level with students needing to demonstrate more than elementary skills expected at that year level’.

The report also identifies gaps in achievement between Australian students by location, gender and student background.

In addition to completing the assessment, students completed a questionnaire to provide information on their family background, aspects of motivation, learning and instruction in mathematics and general context including instructional time and class size. A school questionnaire, answered by the principal or the principal’s delegate, sought descriptive information about the school, including the quality of human and material resources, decision-making processes and information about instructional practices, and school and classroom climate.

Feedback from the questionnaires can help provide explanations for results and raise questions for further examination.

More students across Australia perceived their relationship with teachers to be positive than students across the OECD; however, 25 per cent of Australian students believed that school had done little to prepare them for adult life after school.

Internationally, and in Australia, girls held much more negative beliefs than boys about mathematics. For example:

Class size is often brought up in debates about how to improve achievement. The average class size reported by Australian students was smaller than the OECD average, ranging from an average of 19 students in the Northern Territory to 24 students in New South Wales. Average class sizes for the high-performing countries were 33 students or larger.

Results from PISA 2012 suggest that a school or country’s disciplinary climate is reflected in their achievement. Australian students reported a higher frequency of students not listening, noise and disorder, and teachers having to wait for students to quieten down compared to the OECD average, while high-performing Shanghai-China and Hong Kong-China scored well above the OECD average for disciplinary climate.

Signalling that high academic achievement is not just the responsibility of schools, in high-performing Shanghai-China and Singapore 71 per cent and 68 per cent of students respectively reported attending out-of-school mathematics lessons, compared to only 27 per cent of Australian students.

The above findings are just a small sample of the information brought to light in Australia’s national report, PISA 2012: How Australia measures up. The next step is for Australia to draw on evidence-based research to find what works in addressing the areas of concern identified by PISA. In the coming months, ACER will produce research briefings focusing in greater detail on specific issues of interest to Australian schools and teachers arising from the latest PISA results.

Read the full report:
PISA 2012: How Australia measures up, by Sue Thomson, Lisa De Bortoli and Sarah Buckley, is available from < https://research.acer.edu.au >

Questioning the standards of literacy and numeracy