Results from an international assessment of 15-year-olds reveal that the science, reading and mathematics achievement of Australian students is in decline.

The Australian Council for Educational Research (ACER) released the first of two national reports of the 2015 Programme for International Student Assessment (PISA), titled PISA 2015: A first look at Australia’s results, in December 2016.

Managed by ACER at the national level for the Organisation for Economic Cooperation and Development (OECD), PISA measures how well 15-year-olds from across the globe are able to use their knowledge and skills in science, reading and mathematics to meet real-life challenges.

A combined total of more than half a million students from 72 countries and economies took part in PISA 2015, including a nationally representative sample of around 14 500 Australian students from 758 schools.

Figure 1: Performance of countries/economies in PISA 2015 in relation to Australia 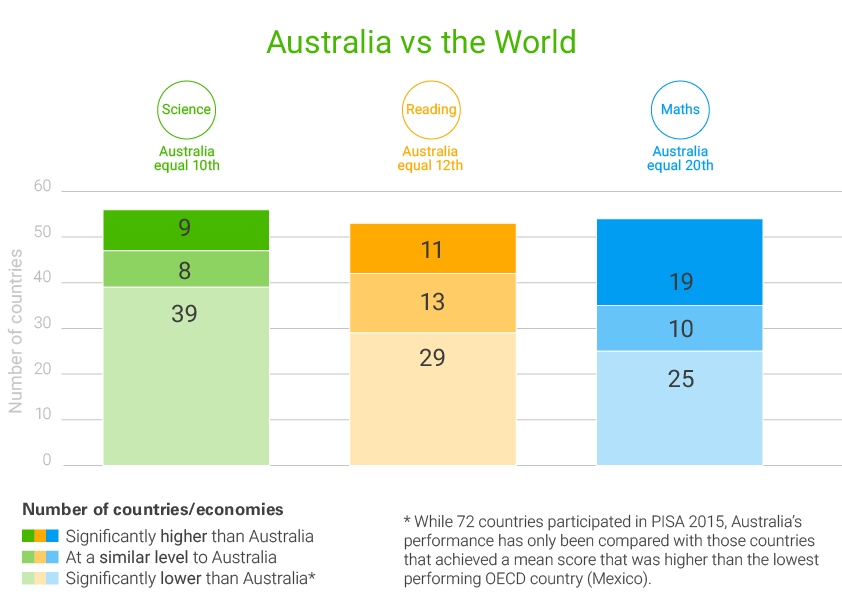 Australia’s participation in PISA is part of the National Assessment Program. As such, the Measurement Framework for Schooling in Australia identifies a proficiency at Level 3 in PISA as the agreed national proficient standard, as it ‘represents a “challenging but reasonable” expectation of student achievement’ at that age.

While the proportion of Australian students meeting or exceeding the national proficient standard, that is, Level 3 in PISA, was above that of the OECD on average, it was well below that of the top-performing country, Singapore. 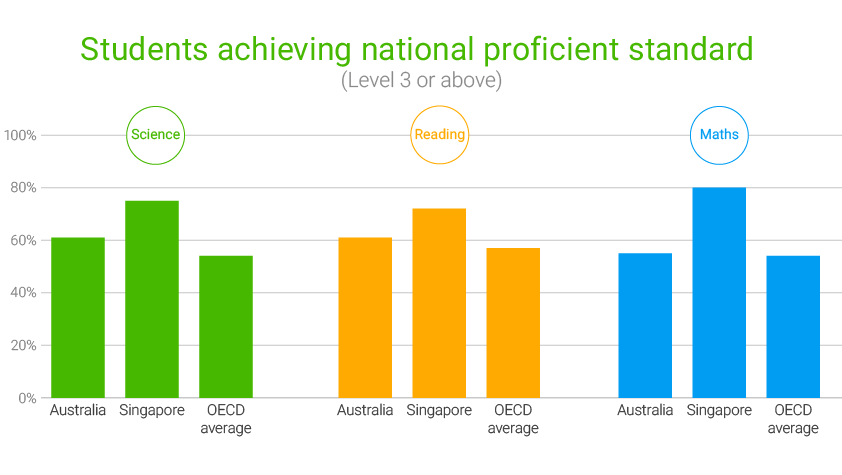 In all participating countries, girls performed significantly higher than boys in reading literacy. In Australia this difference was equivalent to girls receiving around one additional year of schooling.

Australia has participated in all six cycles of PISA since its inception in 2000, allowing trends over time to be mapped.

According to Dr Sue Thomson, ACER Director of Educational Monitoring and Research and lead author of the PISA 2015: A first look at Australia’s results report, Australian students’ ability to apply their knowledge and skills in science, reading and mathematics to real life situations is not only slipping backwards relative to other countries, but declining in an absolute sense.

Figure 3: Australian achievement in PISA since 2000 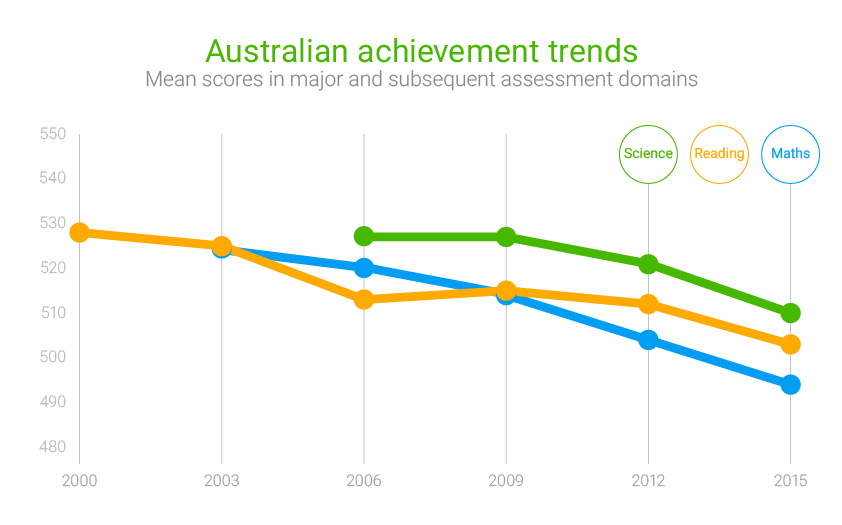 Comparing the performance of Australia’s states and territories, while Victoria and the Northern Territory saw no significant change in achievement in scientific literacy, all other states and the Australian Capital Territory experienced a decline between 2006 and 2015.

In reading literacy there was no decline between 2009 and 2015 for any state or territory except Queensland.

In mathematical literacy, the ACT, Victoria, South Australia and Tasmania experienced no significant change between 2012 and 2015; Western Australia, New South Wales and Queensland experienced a decline, while the NT significantly improved the equivalent of more than three-quarters of a year of schooling.

The report compares the achievement of Australian students in terms of their background characteristics, such as country of birth, main language spoken at home, Indigenous status and socioeconomic background.

In all three domains of PISA 2015, students in the highest socioeconomic (SES) quartile outperformed students in the lowest SES quartile by a difference equivalent to around three years of schooling.

When student-level socioeconomic background is taken into account, the differences between the school sectors are reduced.

A more detailed report on Australia’s results from the 2015 Programme for International Student Assessment will be available in February 2017.

The end of the semester report?