Analysis of NAPLAN numeracy and reading data reveals that single-sex schools on average provide no better value-add over time than coeducational schools, as Katherine Dix explains.

ACER analysis using hierarchical linear modelling of school-level data from NAPLAN 2010-2012 has investigated the impact of single-sex schooling on student achievement at Years 3, 5 and 7.

Researchers from ACER presented evidence and insights regarding the impact of single-sex schooling on student achievement at the International Boys’ Schools Coalition regional conference held at Prince Alfred College, Adelaide, in September 2017.

Only schools with data available at Years 3, 5 and 7 were included in the analysis. Accordingly, the analysis involved 55 girls schools, 33 boys schools and 2909 coeducational schools for which there was complete data. This was representative of 32 per cent of primary schools, 85 per cent of combined schools and six per cent of special schools across Australia. South Australia, Queensland and Western Australia were over-represented in the data due to Year 7 being part of primary school at the time in these jurisdictions.

The average year-level scores in reading and numeracy for each school, as they appear on the My Schools website, provided the standardised measures of academic achievement. By using an achievement score that was the average of the 2010, 2011 and 2012 scores, missing data and cohort effects were minimised.

All of the single-sex schools analysed were located within high or medium-high socioeconomic status (SES) communities. Figure 1 shows the impact of SES (defined by ± 1 standard deviation) on student achievement in numeracy and reading, grouped by school type.

Figure 1: Differences in boys, girls and coed school performance (as an average score across Years 3, 5 and 7) by socioeconomic status 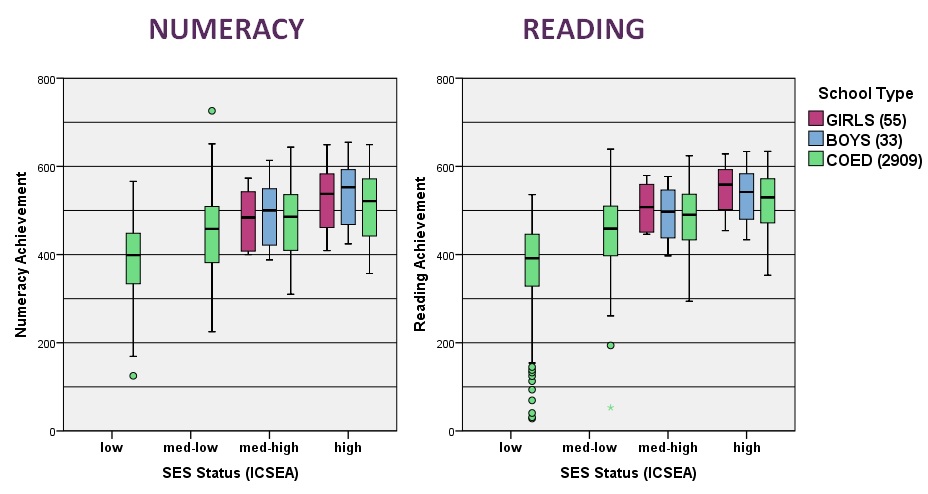 After controlling for the effects of SES, at all year levels, students in boys schools were more likely to outperform students in other school types in numeracy achievement, as shown in Figure 2. 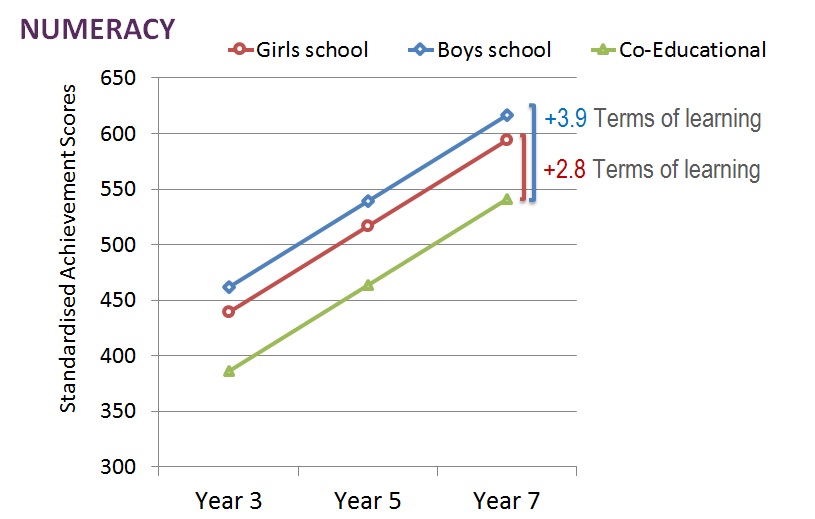 Boys schools were, on average, one school-term of learning ahead of students in girls schools, and one year of learning ahead of students in coeducational schools. Importantly, the differences in numeracy achievement remained the same between Years 3, 5 and 7, suggesting that there is no value-add over time to being in a single-sex school compared to a coeducational school.

The gap between the numeracy achievement of students in girls schools and students in boys schools in this analysis of NAPLAN data is consistent with the gap in mathematical literacy achievement identified in the 2012 OECD Programme for International Student Assessment (PISA), in which Australian 15-year-old boys performed at a level approximately one-third of a school year ahead of girls. This suggests that, at the time that is the focus of these analyses and when mathematical literacy was the major domain assessed in PISA, the gender gap in numeracy performance in primary school continued well into secondary schooling.

In terms of reading achievement, after controlling for the effects of SES, students in girls schools were more likely to outperform students in other schools at all year levels. Differences in reading achievement in favour of girls have been reported in other large-scale studies such as PISA and the Progress in International Reading Literacy Survey. 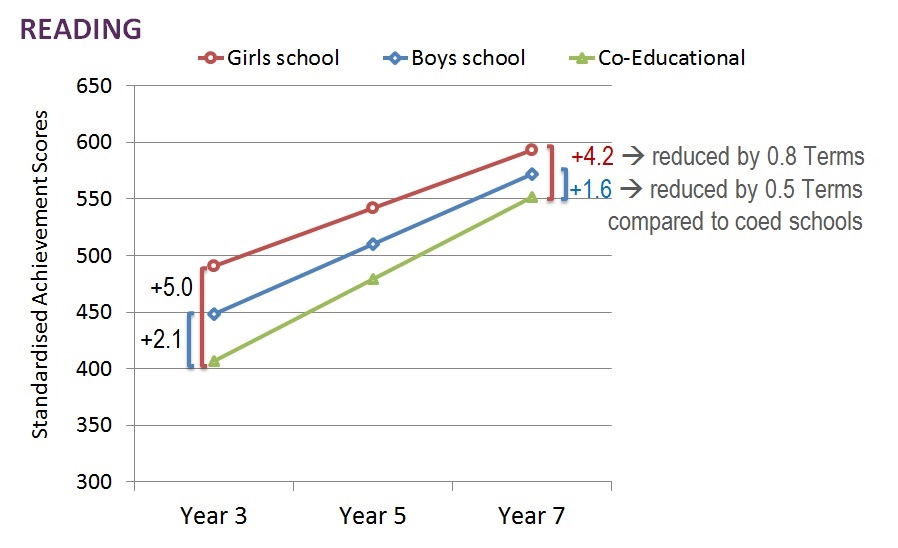 Importantly, the narrowing gap in reading achievement as students progress by year level suggests that the value-add over time that is experienced in coeducational schools is not being realised in single-sex schools.

Debate continues about the benefits of single-sex schools on academic achievement in Australia and internationally.

Questions about value-add may, however, be moot if the decline in the number of single-sex schools in Australia continues. Australian Bureau of Statistics data show that the proportion of students from independent schools attending single-sex schools fell from 31 per cent in 1985 to 24 per cent in 1995. By 2015, this proportion decreased further to 12 per cent of students, based on analysis of 2015 My Schools data. If this trend continues, there will be no single-sex independent schools in Australia by the year 2035.

The end of the semester report?