Social network analysis shows one of the key objectives of the Australia Awards Leadership Program – helping alumni build connections with their fellow alumni – has been achieved.

Since 2016, the Australian Department of Foreign Affairs and Trade (DFAT) has commissioned the Australian Council for Educational Research (ACER) to evaluate the development contributions and diplomacy outcomes of Australia’s investment in the Australia Awards and other Australian Government scholarships and fellowships.

The latest Australia Awards Global Tracer Facility case study explores the connections, networks and long-term outcomes of a group of alumni who were part of the Australia Awards Leadership Program (AALP).

The AALP was offered during 2013 and 2014 to a select group of Australia Award recipients from around the world. The program provided opportunities for awardees to not only build their leadership skills, but also foster connections in order to create cross-country partnerships and stronger links with Australia.

Building on the successful implementation of the 2020 social network analysis of alumni from Kiribati, ACER developed and implemented a new online survey using a social network approach in order to determine the impact of the AALP on connections developed between alumni.

The social network analysis examined whether connections were developed during the program (the ‘on-award’ network) and whether they have been sustained in the seven or eight years since they completed their scholarship (through five networks: Australian connections, job advice, information sharing, leadership guidance and informal connections). Fieldwork for the survey was conducted in October to November 2021.

Of the 286 alumni that completed the AALP, 198 were successfully contacted via email and invited to participate in the survey. The results of the social network analysis are based on 123 alumni who responded to the social network section of the survey. In completing this part of the survey, an alum could nominate any of their 286 fellow AALP peers as someone they developed a connection with during their participation in the program. 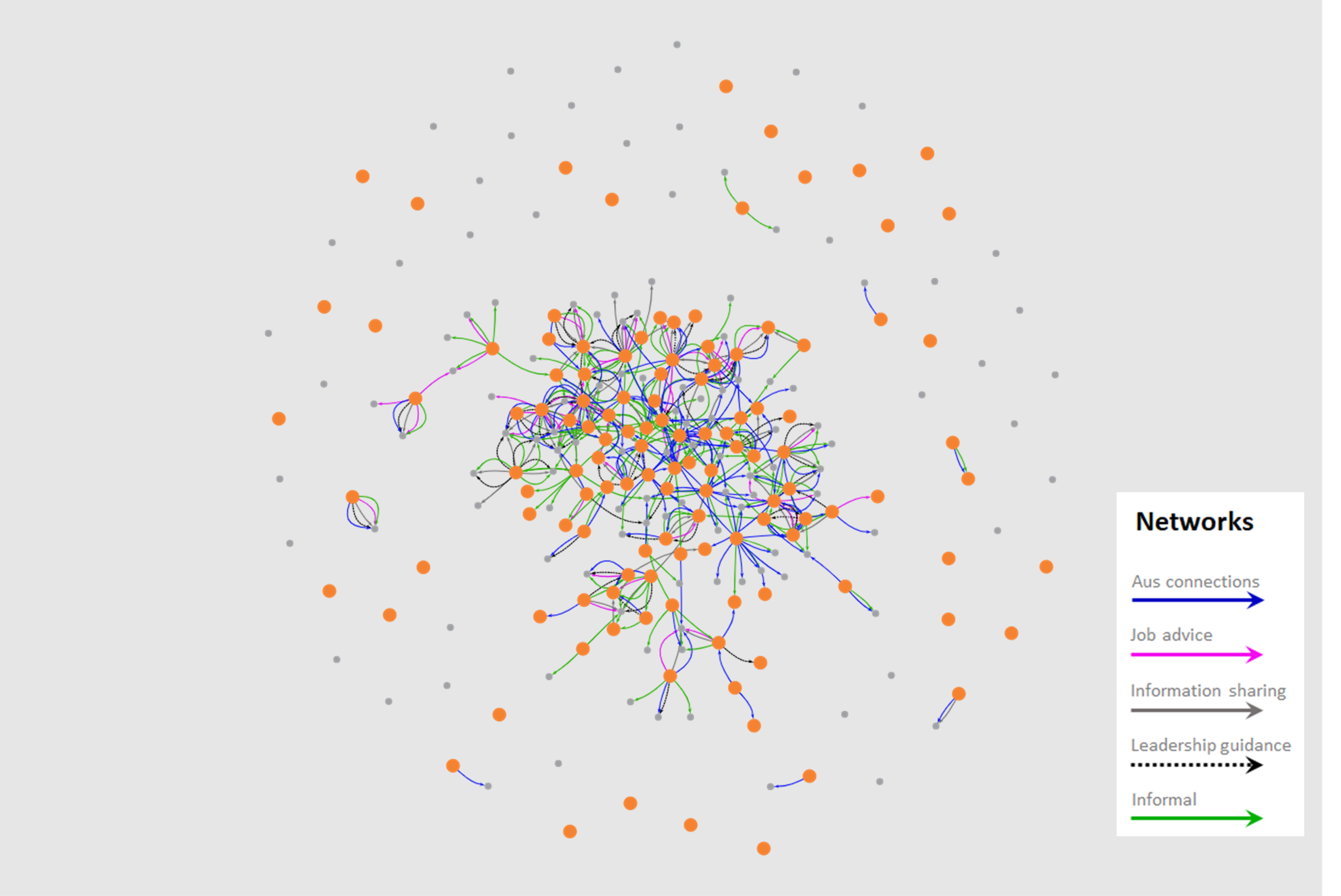 Figure 1 illustrates that current connections between alumni more frequently occur for informal reasons or when seeking to develop connections with Australia or Australian organisations.

In addition to mapping the structure of connections between individuals, social network analysis can also look at patterns between connections and the characteristics of individuals in a network.

Investigation of the current networks between AALP alumni (i.e. those in Figure 1) in combination with alumni characteristics showed that while many relationships between alumni were based around region location, there were also connections maintained between alumni who originated in different parts of the world (see Figure 2). 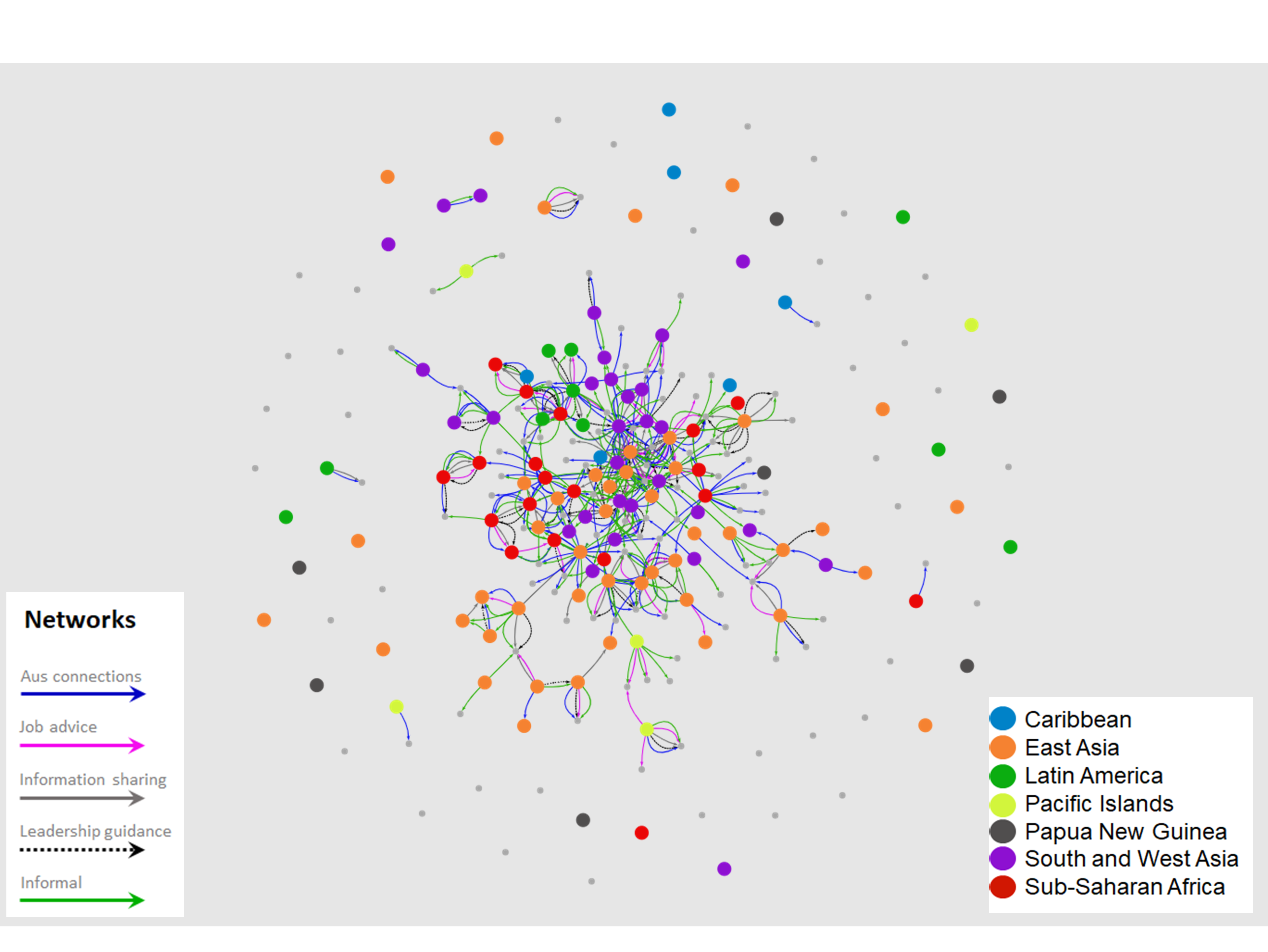 Implications of the results

The analysis suggests that in-person events and supplementary programs to the Australia Awards such as the AALP encourage connections between alumni and with Australia, and should therefore be more widely considered. For instance, conferences involving industry and DFAT, as well as mentoring programs are useful for enhancing the experience of the Australia Awards for alumni and enhance cooperation with Australia. Furthermore, the evidence here shows that fostering on-award connections does lead to on-going networks with some of these networks operating between alumni from different parts of the world. ■

Find out more:
The Australia Awards Global Tracer Facility is managed by the Australian Council for Educational Research (ACER) on behalf of the Australian Department of Foreign Affairs and Trade (DFAT).

Cultivating development in the Pacific