Australian students motivated to achieve – but some more motivated than others

A new report finds that Australian 15-year-olds may be more motivated to achieve than the majority of their OECD peers, but motivation is significantly affected by disadvantage.

A new report from the Australian Council for Educational Research (ACER) on data from the 2015 OECD Programme for International Student Assessment (PISA) survey shows that Australian students are more motivated to achieve than peers in 26 of the 35 OECD countries surveyed. However, significant differences were found between cultural and geographical groupings within Australia and motivation levels were strongly affected by factors associated with disadvantage.

“The data show that disadvantage associated with an Indigenous background, low socioeconomic status and living in a rural or remote area is related to lower motivation levels,’ Dr Thomson said. ‘This is important because motivation to achieve plays a key role in educational success, and in an individual’s drive to set and attain education and career goals.’

How do we measure motivation?

An index of achievement motivation was created from students’ responses, scaled so that higher scores on the index reflected stronger agreement to the items. 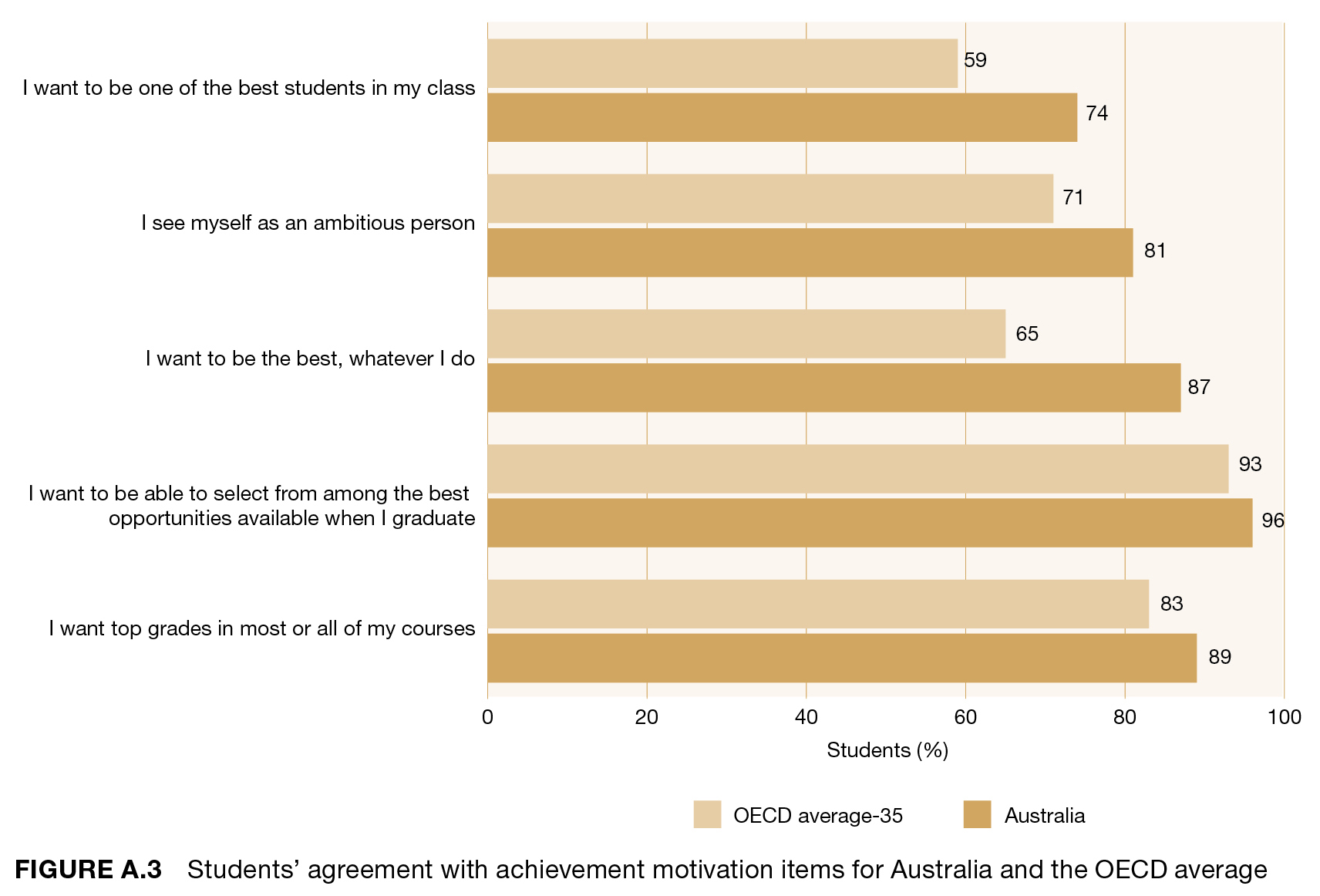 Across the country, female, non-Indigenous, high socioeconomic status (SES) or metropolitan-based students were more highly motivated to achieve than their peers, while Australian-born students recorded the lowest motivation levels, as compared with first generation and foreign-born students.

Measuring motivation also involves determining whether or not students can correctly assess what motivation looks like in day-to-day life and recognise motivation in others. This is important because studies suggest that students cannot display motivated behaviours if they do not know what they look like.

The report highlighted significant differences in the ability of various student groups to correctly identify motivated behaviours when presented with three scenarios illustrating low, moderate and high motivation. Several groups were far more likely to incorrectly identify negative (or low) motivation behaviours – for example, ‘Julian’s’ tendencies to give up easily when confronted with a problem and to be often unprepared – as positive. Fourteen per cent of Indigenous students (compared with 5 per cent of non-Indigenous peers), 13 per cent of remote area students (compared with 5 per cent of metropolitan students) and 9 per cent of students in the lowest SES quartile (compared to 3 per cent in the highest quartile) agreed that ‘Julian’ was motivated.

The report says high performance in PISA does not necessarily correspond to high achievement motivation, as some countries towards the top of the motivation index were some of the lowest performers academically, and vice versa. Eleven countries, including both high-performing and culturally similar English-speaking countries were selected for comparison with Australia. Those were: Canada, Estonia, Finland, Hong Kong (China), Japan, Macao (China), and Singapore (all high-performing countries); and New Zealand, the United Kingdom, Ireland and the United States (culturally similar English-speaking OECD countries). Finland, Japan, Macao (China) and Estonia all had mean scores on the achievement motivation index that were significantly lower than the OECD average, while the culturally similar countries all came in higher than the OECD average, and Hong Kong and Singapore’s scores were significantly higher than the OECD average. Australian and Canadian students’ motivation levels were roughly equal.

Nonetheless, research has found that achievement motivation is important in influencing future-oriented expectations and intentions, and in promoting the kind of mindset that helps students identify long-term career goals that protect against school failure.

Can a student be too motivated to achieve?

The survey included items that focus on students drawing comparisons between themselves and their peers and competing against their peers.

Being driven by too high a level of motivation to achieve (in these terms of comparison and competition) can work against students and turn into a disabling form of perfectionism, especially among students who set (overly) ambitious goals and expectations. Students who are overly focused on their achievement, particularly in relation to others, can develop a fear of failure, resulting in procrastination, self-doubt, and mental exhaustion. A forthcoming report will examine some negative consequences of emphasising students’ performance in relation to their peers, and explore students’ reports of test anxiety.

Family fun the key to a good life in adolescence

Investing in teacher development: Building an evidence base in Lao PDR