A recent ACER study looked at who is teaching in Australia’s school libraries and highlighted two trends that warrant further attention.

ACER Senior Research Fellow Dr Paul Weldon analysed data about teachers working in school libraries. The data were from the Staff in Australia’s Schools (SiAS) surveys on behalf of the Commonwealth Department of Education in 2007, 2010, and 2013.

In just three years, a sharp divide opened up between low socioeconomic status (SES) schools and high SES schools. The 2010 SiAS data showed the proportion of teachers in primary school libraries equally distributed across the three bands of low, medium and high SES schools (based on postcode).

Dr Weldon’s research reveals that by 2013 the allocation of teachers in low SES primary school libraries dropped by around 16 per cent, while high SES primary schools experienced growth of over 13 per cent in the same period. Secondary schools followed the same trend but to a lesser degree. According to Dr Weldon, the available data do not explain why this gap has developed so quickly. 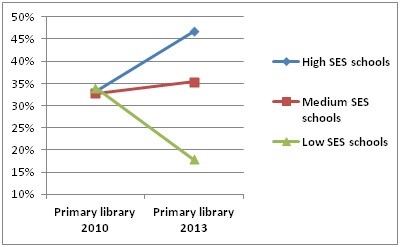 The survey asked teachers working in the library to indicate if they had undertaken any tertiary study in librarianship. The results show a high proportion of teachers currently working in a school library role with no tertiary training in the area. In 2013 over one-third of primary teachers in the library were not trained, and one-quarter of secondary teachers.

This is an edited extract from an article by ACER Manager of Information Services Pru Mitchell that first appeared in Teacher Magazine.

Download the full report, What the Staff in Australia's Schools Surveys tell us about teachers working in school libraries, by Paul Weldon.

Educational progress for all