One of the goals of Australian schooling is to prepare young people to participate in a democ-ratic society. Wolfram Schulz describes the latest findings of the National Assessment Program – Civics and Citizenship, in light of this goal.

Under Australia’s National Assessment Program, every three years nationally representative samples of students are selected to undertake assessments of civics and citizenship. In October 2010, more than 7200 Year 6 students from 335 schools and around 6400 Year 10 students from 312 schools completed a test of students’ skills, knowledge and understandings of Australia’s system of government. This was the third cycle of the national assessment program, following surveys in 2004 and 2007.

ACER has conducted each of these assessment cycles on behalf of the Ministerial Council on Education, Early Childhood Development and Youth Affairs (MCEECDYA, formerly MCEETYA). ACER’s work involved preparing the assessment framework, developing and trialling test and questionnaire items, implementing the assessment and the marking of test items, as well as writing the public report. The results were published by the Australian Curriculum, Assessment and Reporting Authority (ACARA) in September 2011.

There are a number of different approaches to civics and citizenship education internationally. These approaches include providing a specific subject, integrating relevant content into other subjects and including content as a cross-curricular theme. At the time the National Assessment Program – Civics and Citizenship was introduced, no state or territory in Australia had a dedicated key learning area for the subject matter, and curricula varied significantly across its jurisdictions.

The purpose of civic and citizenship education in Australia was expressed in the 2008 Melbourne Declaration on Educational Goals for Young Australians, which states that ‘all young Australians should become successful learners, creative and confident individuals and active and informed citizens’.

Civics and citizenship knowledge and understanding were assessed through a test that included multiple-choice, true/false and constructed response items. Two Proficient Standards were established to denote the point that represents a ‘challenging but reasonable’ expectation of student achievement at each year level.

At Year 6, 52 per cent of students were able to demonstrate the knowledge and understanding required to meet the Proficient Standard. This was consistent with the findings of the 2007 assessment, when 53 per cent met or exceeded the Proficient Standard. However, although students’ performance did not increase at the national level, both Western Australia and the Northern Territory showed statistically significant improvements in average performance.

With regard to student background, it was found that there was no significant difference between those students who mainly speak English at home and those who speak another language at home. However, at both grade levels Indigenous students had much lower levels of civic knowledge than non-Indigenous students.

Student engagement and participation were assessed with a student questionnaire. The questionnaire sought to uncover the attitudes, values, dispositions, behaviours and intentions of students in relation to civic issues. Specific questions determined the frequency and nature of current involvement in civic-related activities at school and in the community. It also collected information about students’ trust in civic institutions and processes, attitudes towards Australian Indigenous cultures and Australian diversity, and prospective engagement as an adult citizen. 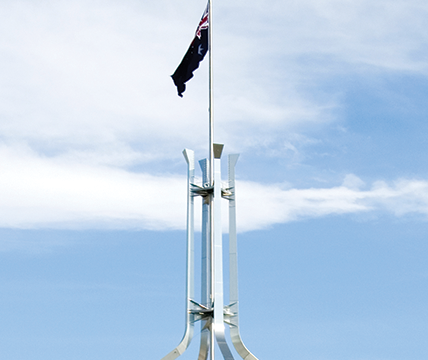 The findings of the 2010 assessment for the first time provide insight into young Australians’ perceptions of civic society and their notions of citizenship. In the 2007 assessment, only information about student participation in civic-related activities inside and outside school was collected through the student questionnaire.

The responses to the student questionnaire revealed that at both year levels, the majority of students had participated in class elections, school-based community activities and had represented the school away from the classroom. However, the results also revealed a decline in active engagement at school from Year 6 to Year 10. There was a general tendency among Year 10 students to report lower participation than Year 6 students in activities such as participation in student parliaments, voting for class representatives and participation in peer support programs. Girls were more likely than boys to have participated in some of these activities.

In order for individuals to actively engage in society, they need to believe that their engagement has value. Large majorities of Australian students at both year levels were in agreement with positive statements about the value of student participation at school. Among Year 10 students, 80 per cent agreed that citizens can influence government policies in Australia. Girls were found to express more positive attitudes regarding the value of civic engagement than boys.

Most Year 10 students held positive attitudes towards Australian diversity. Eighty per cent of students agreed that Australia benefits greatly from having people from many cultures and backgrounds. However, there were also relatively large percentages expressing agreement with some negatively worded statements. For example, almost half of the students agreed that immigration should be cut when there are not many jobs available and that Australia would become less peaceful as more people from different backgrounds came to live here.

The data from this national assessment program also suggest that students in their majority demonstrate positive attitudes towards Australian diversity and Australian Indigenous cultures, which are characteristics the Melbourne Declaration defined as goals for the education of active and informed citizens in this country.

The National Assessment Program – Civics and Citizenship seeks to determine whether the education system is successful in its endeavour to develop informed and active citizens.

The results show that, although gains have been made at Year 10 level, it still appears that there is work to be done in ensuring that students develop a more complete depth of content knowledge that should be expected of ‘informed citizens’.

With regard to ‘active citizens‘, the questionnaire responses showed interesting differences in behaviour between year levels and genders. Further collections of this kind of information about student engagement and values may help to elaborate further the degree to which the aspirations currently described in the Melbourne Declaration regarding student citizenship can be achieved in the near future.

In 2011 ACARA began developing the civics and citizenship education component of the national curriculum. It is envisaged that the next cycle of the National Assessment Program – Civics and Citizenship, due in 2013, will incorporate the desired learning outcomes of the national curriculum. Future assessments of this learning area should continue to provide valuable monitoring information about the degree to which Australian schooling is successful in supporting students to become informed and active citizens.

Read the full report:
The National Assessment Program – Civics and Citizenship Year 6 and 10 Report 2010, published by ACARA, is available from <research.acer.edu.au/civics/11>