Maintaining the quality of GP registrar training in Australia

The postgraduate training experiences of GP registrars enrolled in the Australian General Practice Training program are assessed in the annual National Registrar Survey (AGPT NRS), and the most recent survey revealed high levels of satisfaction with training provision.

In May 2017, the Australian Council for Educational Research (ACER) was engaged by the Department of Health to review and revise the AGPT NRS instrument to ensure its continued relevance and effectiveness. The survey is administered by ACER and more than 1700 registrars – roughly 40 per cent of those surveyed – responded to the 2017 survey. Eighty-nine per cent reported overall satisfaction with the training and education received during Semester 1 of 2017, which represented an increase on the previous year. Eighty-eight per cent indicated satisfaction with their Regional Training Organisation (RTO) and 97 per cent were satisfied with their clinical work and with the level of workplace responsibility they were given. Only four per cent reported being very dissatisfied with their training – a decrease from 10 per cent in 2016.

Key findings are illustrated in this infographic. 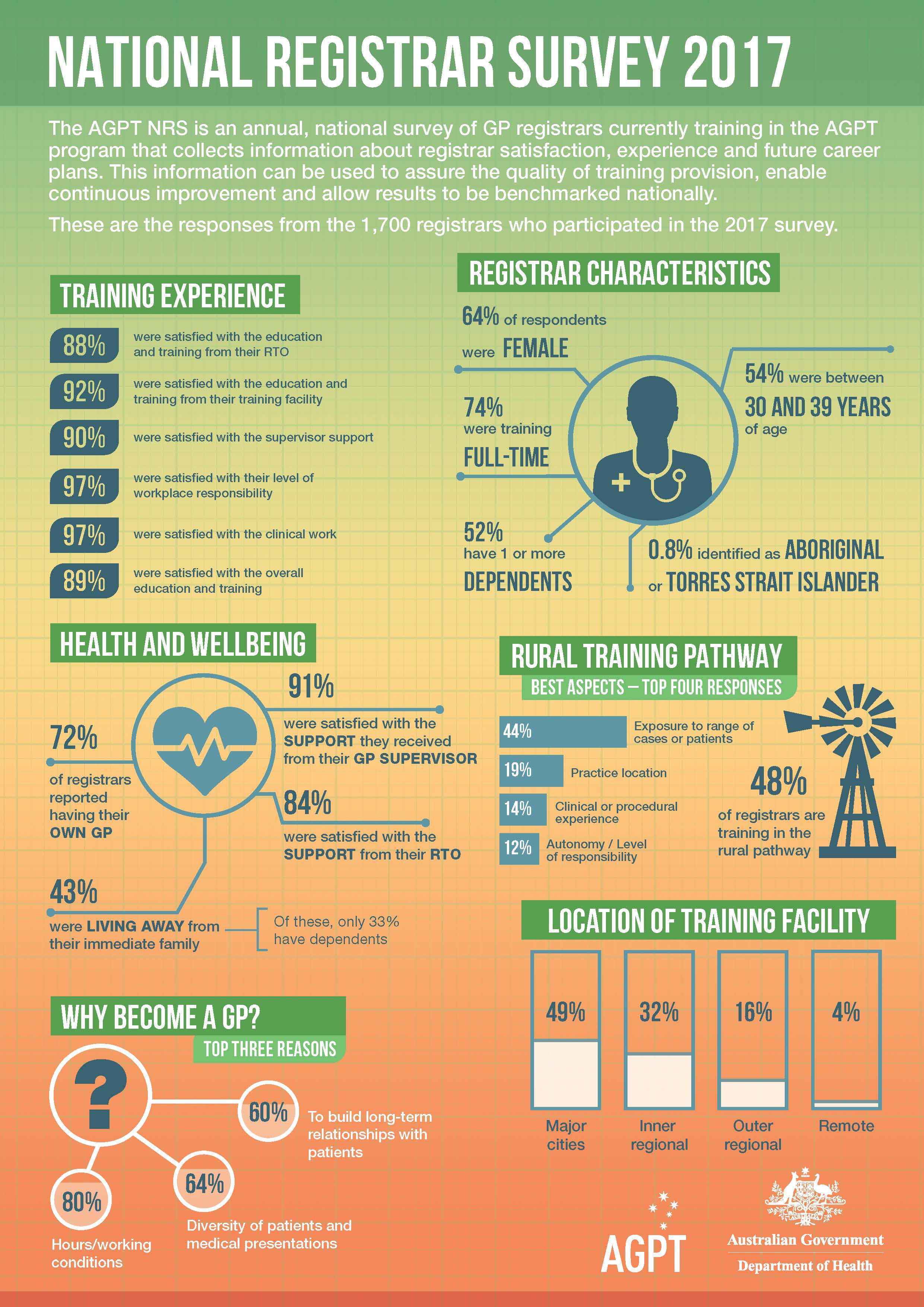 The Department of Health uses the results of the AGPT NRS to monitor satisfaction with the vocational training delivered by its RTOs, and to ensure that training continues to be educationally relevant and fit for purpose, and that it meets the specialist medical training standards determined by the Australian Medical Council.

Who are Australia’s trainee GPs?

As well as measuring satisfaction levels, the survey collects information about GP registrars’ demographics, training contexts and other aspects of their training experience. Nearly two-thirds of respondents were female and more than half were aged 30-39 years. Around half were born in Australia – with eight per cent from India, four per cent from Malaysia and three per cent from each of the UK, China, Sri Lanka and Myanmar – but just under three-quarters of respondents received their medical degrees in Australia.

ACER has completed administration of the 2018 survey, with results to be reported at a later date.

Dr Rebecca Taylor is a Research Fellow in the both the Assessment and Psychometrics Research Program and the Tertiary Education Program at ACER.

Supply and demand in the Australian labour market