An ACER analysis of Census data shows Australian university students have become increasingly more likely to relocate for university during this century and are more mobile than the general population.

In a recent Joining the Dots research briefing, ACER Principal Research Fellow Dr Daniel Edwards and ACER Research Fellow Eva van der Brugge tracked the movement of domestic undergraduate university students using the Australian Bureau of Statistics’ 2006 and 2011 Census of Australian Population and Households, to identify the residential location of students at the time of and five years prior to the Census.

Subsequent analysis of the 2006 Census revealed that the mobility of the student cohort has increased over time, as in 2006 only 34.7 per cent of students reported living at a different address five years earlier. This represents a 4.2 percentage point shift between the student cohort of 2006 and those in 2011, compared to a 1.9 percentage point increase for the entire population.

Edwards and van der Brugge note that, while this difference is modest, it does show that the propensity for mobility has become greater among university students in the past five years than across the wider population.

The size of the loss in regional areas was linked to the relative population size of these areas, with Regional New South Wales’ loss of more than 8000 student the largest, closely followed by Regional Victoria. However in relation to the overall number of students still residing in these areas, the net losses in these two regions were relatively smaller than for Regional South Australia and Regional Western Australia (see Figure 1). 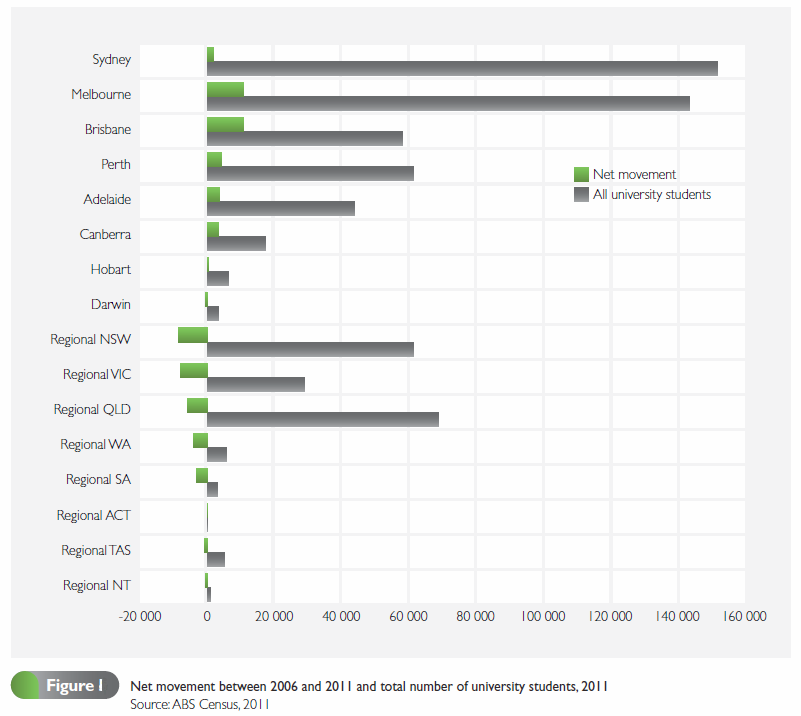 These outcomes show not only the different dynamics in terms of student mobility from regional to metropolitan areas, but also offer insight into the differences between capital cities in Australia. Interestingly, Melbourne and Brisbane were the big winners, with net growth of more than 10 000 students. Meanwhile the largest city in Australia only experienced a modest net increase in students, having experienced losses of students over this time to Melbourne, Canberra and Brisbane.

Edwards and van der Brugge hope that their analysis may help further expand research into the issues surrounding movement, including university choice, barriers to study and motivations for inter-city movement among students.

Find out more:
Joining the Dots is ACER’s series of Research Briefings about Australian Higher Education. Joining the Dots has a focus on data-driven analyses of policy. Content is available on the Informit platform. Further information about content and access for those not linked to Informit can be found at <www.acer.edu.au/jtd> or by emailing jtd@acer.edu.au.

Measuring the quality of GP training