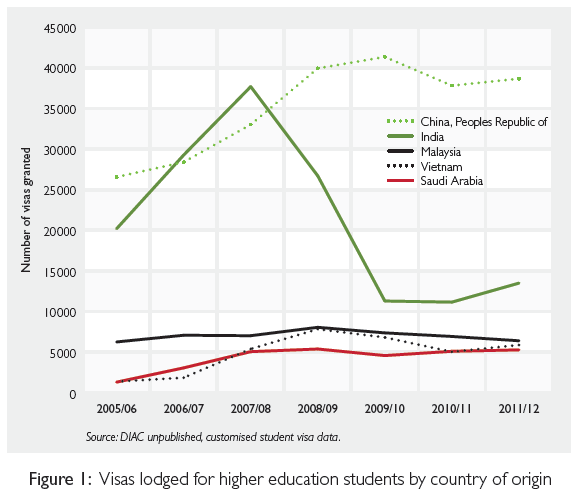 In the 2007-08 financial year, India overtook China as the country with the most higher education visa holders in Australia. However, the number of higher education visas granted to Indian students then suddenly declined, from its peak of 34 200 in 2007-08 to just 9750 in 2011-12 – a 71 per cent fall.

The trends for other countries that contribute large numbers of international students do not reflect the same dramatic pattern. China, the only other market in the same order of magnitude as India in 2007-08, experienced 18 per cent growth in visas granted. Among the next three largest source nations – Malaysia, Vietnam and Saudi Arabia – there have only been slight changes.

Dr Edwards and van der Brugge suggest that changes to migration policy made by the Australian Government between 2009 and 2011, which weakened the connection between studying in Australia and gaining permanent residency, have had a more profound impact on Indian visa applicants than on any of the other major source countries.

Dr Edwards and van der Brugge analysed unpublished data from the Department of Immigration and Citizenship and discovered a 21 per cent increase in the number of higher education student visa applications
lodged by prospective Indian students in 2011-12. This is the first sign of growth in visa applications after three years of decline and suggests that applicant numbers may have now ‘bottomed-out’. 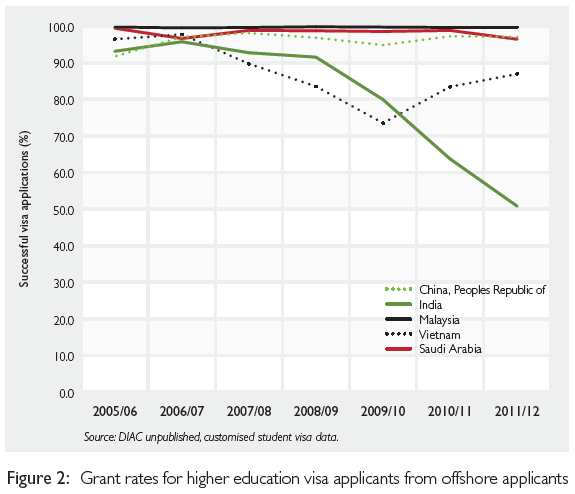 The growth in the number of visa applicants in the last financial year also translated into an increase in the number of visas granted to Indian applicants. However, this increase was tempered by a further downturn in the success rate of these visa applications. In 2011-12, only around 50 per cent of Indian students who applied for a higher education visa offshore were successful, down from 96 per cent in 2006-07. In contrast, the Chinese grant rate has remained relatively stable and in 2011-12 was 97 per cent.

The United Kingdom and New Zealand have similarly doubled their Indian student numbers, and the United
States has experienced modest growth, leading Dr Edwards and van der Brugge to suggest that it is factors specific to Australia that have influenced the local decline in international students.

In addition to the migration policy changes, Dr Edwards and van der Brugge identified the recent strengthening of the Australian dollar, the closure of some tertiary providers (mainly in the VET area) and widespread media attention on violence against international students as factors specific to Australia that may have contributed to declining student numbers.

Find out more:
Joining the Dots is a subscription-based resource provided by ACER to those with an interest in Australian higher education. Details for subscriptions are available at <www.acer.edu.au/jtd> or by emailing jtd@acer.edu.au