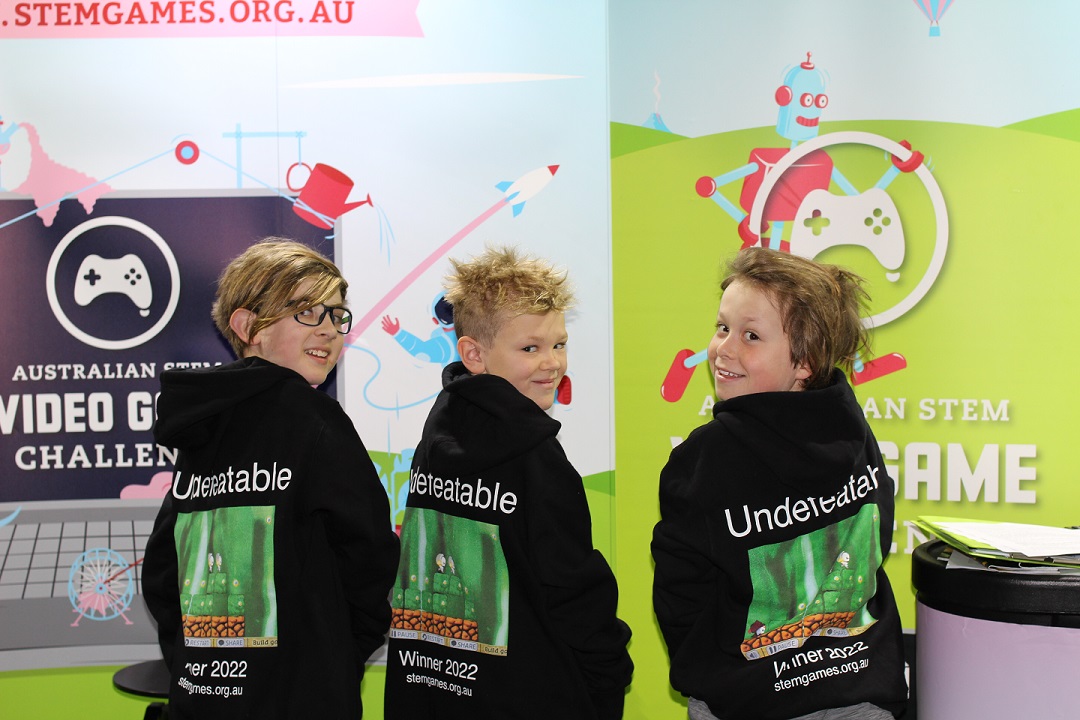 The games created by the winners of the 2022 Australian STEM Video Game Challenge (STEM VGC) were on display at PAX Aus in Melbourne.

Such was the excitement of the winners of the STEM VGC that some of them travelled all the way to Melbourne to use their prize of tickets to the sold-out PAX. PAX (originally known as Penny Arcade Expo) is a gaming culture festival involving tabletop, arcade and video gaming. More than 80,000 visitors over three days tested new games, visited game creators, competed on giant screens, played board games and attended information sessions and workshops.

Hundreds of these fans visited the STEM VGC booth to play the winning games from the 2022 challenge. Six computer stations were set up, and visitors could choose to play any of the winning games. Some of the fans were so dedicated, they played the games from beginning to end, in a few cases taking more than an hour. It was STEM VGC Director Lisa van Beeck’s first experience of PAX, ‘I was worried that our student games might not stand-up against the well-known and professional games. I quickly learned that PAX fans really respect the art of creating video games, and thought it was very cool that these were created by school students.’

Stuart from the Pembroke School in Adelaide, Rian from West End Primary School in Brisbane and Oliver, Eli and Daniel from MidCoast Christian College in Taree all made the trip to Melbourne for PAX. Students got a thrill from seeing people play their games, even chatting to some of the players.

Melissa Tindall is the librarian and technology teacher at MidCoast Christian College. Melissa incorporated the STEM VGC into class activities with her primary aged students. She planned for her students to have 10 x one-hour lessons to work on their coding and creative elements, as well as the most essential part – the game design document. ‘I find students are keen to get in there and make a game without a clear idea of purpose or goal. The game design document is a critical part of the journey, and often best to start with to focus students’ games and ideas.’

The most frequent comments from visitors to the STEM VGC booth were ‘I wish there was something like this when I was at school’ and ‘I wouldn’t even know how to start creating a video game.’ Lisa van Beeck explained that all the STEM VGC entries are built using free or free for education platforms like Scratch, GODOT, Unreal Engine and Unity. Scratch is a popular entry-level platform for students in the year 5-8 categories. Scratch allows students to experiment with the idea of computer programming by using blocks that are put together to make simple code. Students in the year 9-12 categories tend to use platforms that require coding. There are many great tutorials available online to help students get started. Ms Van Beeck added that creating a video game takes much more than just coding. A winning video game requires strong storytelling, visual design, music composition, testing and time management to be successful.

The standard of entries gets higher every year. We are excited to see how the students incorporate next year’s theme into their game designs. The theme for the 2023 competition is Construction and Destruction and entries will open in early 2023. For more information visit Australian STEM Video Game Challenge (stemgames.org.au)