Cultivating development in the Pacific

The skills and knowledge developed through Australian Government scholarships for study in neighbouring countries positively impact the careers of alumni and have flow-on effects on their colleagues, networks and wider communities, research shows.

Each year since 2016, the Australian Department of Foreign Affairs and Trade (DFAT) has commissioned the Australian Council for Educational Research (ACER) to evaluate the development contributions and diplomacy outcomes of Australia’s investment in the Australia Awards and other Australian Government scholarships and fellowships.

The research of the Australia Awards Global Tracer Facility has so far focused on the experiences of scholarship alumni that studied in Australia. The Facility’s latest case study investigates the long-term outcomes of scholarships offered to people from the Pacific to study at institutions in the Pacific region.

The Australian Regional Development Scholarships (ARDS) were funded by DFAT from the early 1990s. These scholarships were renamed the Australia Awards Pacific Scholarships (AAPS) in 2014. All alumni of these two programs with a known email address were invited to participate in a survey in August 2021. A total of 388 alumni completed the survey, representing an impressive 49.7 per cent response rate.

Alumni were from 12 different Pacific Island countries: the Federated States of Micronesia, Fiji, Kiribati, Marshall Islands, Nauru, Palau, Samoa, Solomon Islands, Tonga, Tuvalu and Vanuatu. These alumni were aged between 25 and 70 years at the time of the survey and had studied across a mixed range of fields of education. The majority (93 per cent) studied at a Fijian institution.

Study years of this cohort ranged from commencing in 1994, to completing in 2021. For the majority of these alumni, the Australian scholarship enabled the completion of a Bachelor degree (72 per cent) with a further 17 per cent either undertaking a graduate diploma, certificate or Masters qualification. The remaining 11 per cent of alumni in this survey completed a diploma, short course or other type of qualification.

Almost all alumni (96 per cent) agreed that following their qualification they had seen improvements in their work and career opportunities: 90 per cent were employed and 84 per cent held a leadership position at work or in their community. Nine per cent of alumni were undertaking further study and a small proportion reported that they were not employed or had retired. Female alumni were more likely than male alumni to report that they were not currently employed.

An important intention of the Australia Awards is that the content, methodologies, tools and approaches that are developed in the qualifications that are part of the scholarship are shared by alumni when they return to their work following completion of their award. It is hoped that through this, the impact of the Australia Awards provides ongoing benefit not only for the alumni themselves, but for their colleagues, family and communities.

Almost every alumni indicated sharing skills and knowledge from their scholarship with their colleagues (98 per cent), family and friends (95 per cent), and community (89 per cent). About nine out of every ten alumni respondents also indicated they have helped improve local communities and contributed to development of their country. In addition, more than three-quarters of alumni indicate using their new knowledge and skills to help in regional or international development.

One of the most effective ways to explore the contributions of alumni is through the lens of the United Nations Sustainable Development Goals (SGDs). AAPS and ARDS alumni are contributing to all 17 SDGs, with almost half making contributions to Quality Education (SDG 4) and Good Health and Wellbeing (SDG 3).

Figure 1: Proportion of AAPS/ARDS alumni respondents contributing to each of the UN SDGs 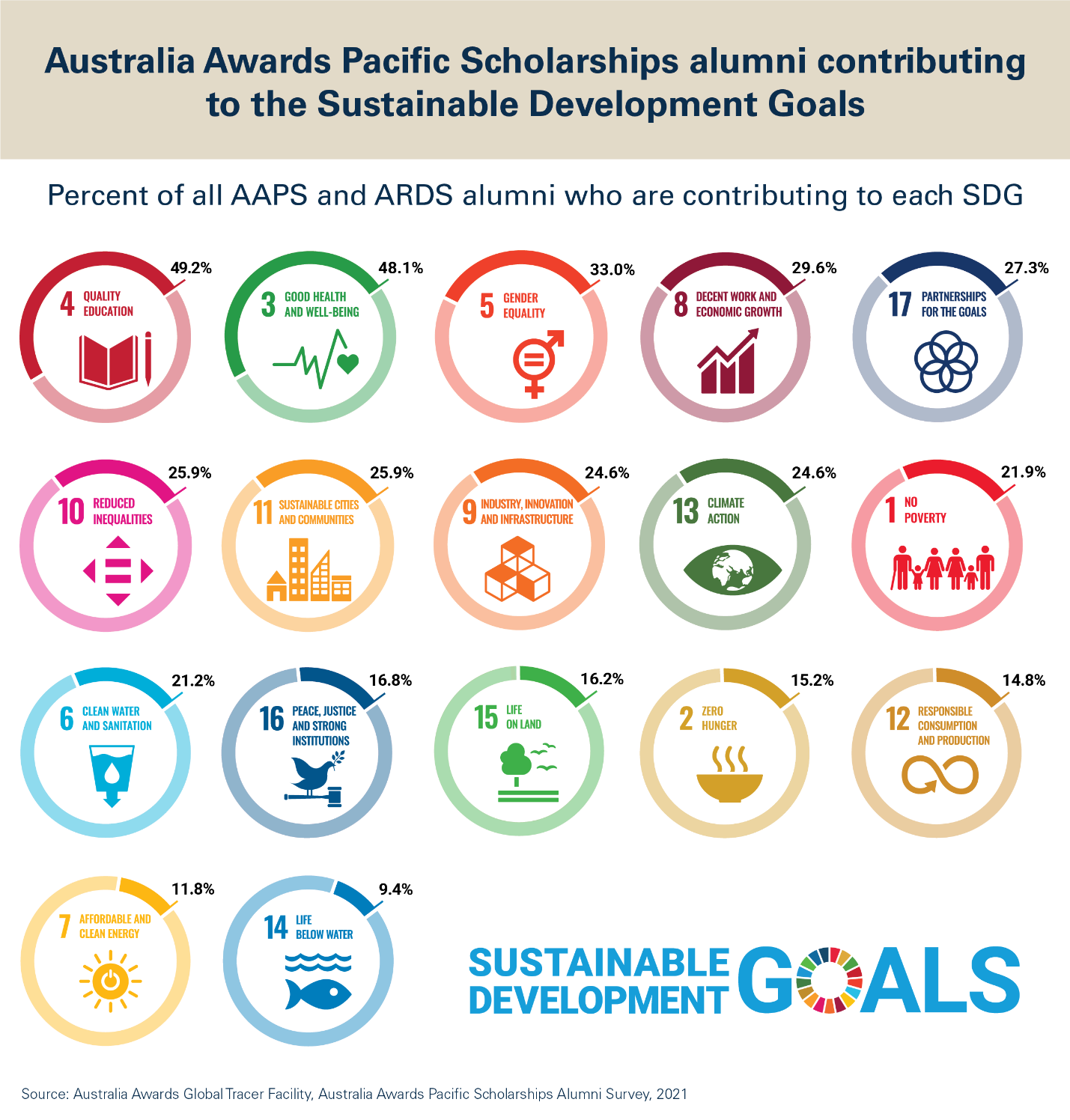 The survey also revealed that just over one-third of the responding AAPS/ARDS alumni have contributed to the COVID-19 response in their country.

Of these alumni, about one quarter were ‘frontline responders’, including nurses, doctors, pathology specialists. A further 10 per cent were involved in the development of government policy and processes to tackle COVID-19. And about one third are ‘secondary responders’ making substantial adaptions to the way they work or service others due to the pandemic, including alumni involved in advocacy, education and communications about the pandemic.

Alumni identified a range of factors linked to their award that have helped them in the years following graduation. These ‘conditions for success’ include selection of fields of study that align with job markets and development priorities, opportunities for internships while on award, and support from employers to use new knowledge and skills on return from award. Barriers to alumni’s ability to make development contributions included lack of workplace resources or funding, experienced by 45.3 per cent of alumni, and the impact of COVID-19, with nearly 30 per cent impeded by changing work and project delays, while 12.8 per cent had been stood down or lost their job as a result of the pandemic.

The survey also explored alumni needs and interests over the coming years, and identified a range of particular areas in which they seek further professional development. These results, coupled with previous research by the Facility suggest that ongoing engagement that is meaningful to alumni can further increase the impact of alumni on development outcomes and can foster strong, long-term networks with alumni across the Pacific and with Australia. ■

Find out more:
The Australian Awards Global Tracer Facility is managed by the Australian Council for Educational Research (ACER) on behalf of the Australian Department of Foreign Affairs and Trade (DFAT).